A blog formerly known as Bookishness / By Charles Matthews

"Dazzled by so many and such marvelous inventions, the people of Macondo ... became indignant over the living images that the prosperous merchant Bruno Crespi projected in the theater with the lion-head ticket windows, for a character who had died and was buried in one film and for whose misfortune tears had been shed would reappear alive and transformed into an Arab in the next one. The audience, who had paid two cents apiece to share the difficulties of the actors, would not tolerate that outlandish fraud and they broke up the seats. The mayor, at the urging of Bruno Crespi, explained in a proclamation that the cinema was a machine of illusions that did not merit the emotional outbursts of the audience. With that discouraging explanation many ... decided not to return to the movies, considering that they already had too many troubles of their own to weep over the acted-out misfortunes of imaginary beings."
--Gabriel García Márquez, One Hundred Years of Solitude 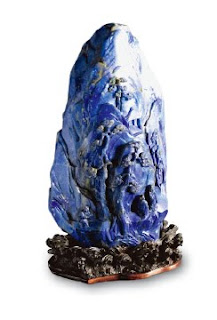 
Lapis Lazuli
(For Harry Clifton)
I have heard that hysterical women say
They are sick of the palette and fiddle-bow,
Of poets that are always gay,
For everybody knows or else should know
That if nothing drastic is done
Aeroplane and Zeppelin will come out,
Pitch like King Billy bomb-balls in
Until the town lie beaten flat.
All perform their tragic play,
There struts Hamlet, there is Lear,
That's Ophelia, that Cordelia;
Yet they, should the last scene be there,
The great stage curtain about to drop,
If worthy their prominent part in the play,
Do not break up their lines to weep.
They know that Hamlet and Lear are gay;
Gaiety transfiguring all that dread.
All men have aimed at, found and lost;
Black out; Heaven blazing into the head:
Tragedy wrought to its uttermost.
Though Hamlet rambles and Lear rages,
And all the drop-scenes drop at once
Upon a hundred thousand stages,
It cannot grow by an inch or an ounce.
On their own feet they came, or on shipboard,
Camel-back, horse-back, ass-back, mule-back,
Old civilisations put to the sword.
Then they and their wisdom went to rack:
No handiwork of Callimachus,
Who handled marble as if it were bronze,
Made draperies that seemed to rise
When sea-wind swept the corner, stands;
His long lamp-chimney shaped like the stem
Of a slender palm, stood but a day;
All things fall and are built again,
And those that build them again are gay.
Two Chinamen, behind them a third,
Are carved in lapis lazuli,
Over them flies a long-legged bird,
A symbol of longevity;
The third, doubtless a serving-man,
Carries a musical instrument.
Every discoloration of the stone,
Every accidental crack or dent,
Seems a water-course or an avalanche,
Or lofty slope where it still snows
Though doubtless plum or cherry-branch
Sweetens the little half-way house
Those Chinamen climb towards, and I
Delight to imagine them seated there;
There, on the mountain and the sky,
On all the tragic scene they stare.
One asks for mournful melodies;
Accomplished fingers begin to play.
Their eyes mid many wrinkles, their eyes,
Their ancient, glittering eyes, are gay.
--William Butler Yeats 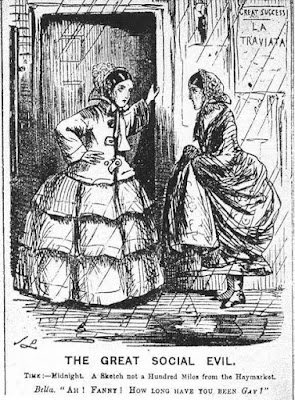 Oh, how glad I am that I don't have to teach this great poem today and deal with the elephant in the room: Gay. We know that Yeats didn't mean it in the currently dominant sense of the word. Well, not entirely. Even in his day, the word "gay" could be used in a sexual sense, meaning "licentious." In the Punch cartoon above, from 1857, the joke hinges on a recognition that the women are prostitutes, and obviously not very joyful ones. And there is perhaps a buried sense lurking even in Yeats's poem that artists are sexually loose, perhaps effeminate. But it's also likely that Yeats, who knew a lot of odds and ends of stuff, had in mind the Provençal gai saber, the "joyous wisdom" alluded to by Nietzsche in Die fröhliche Wissenschaft, a title that was first translated into English as The Joyous Wisdom but is now known by Walter Kaufmann's title, The Gay Science.
Yeats's late poems, of which this is one, are among the great artistic treasures given us by people in their later years, like Beethoven's late quartets, or Verdi's Otello, Falstaff and Requiem. We like to celebrate people who died young -- Byron, Shelley, Keats, Mozart -- but we should also be thankful for the ones who matured into wisdom and poured that wisdom into their art. It was a point I stressed in a review for the Mercury News of the second volume of R.F. Foster's magnificent biography of Yeats:

I find it patronizing to dismiss all occult or spiritual beliefs as childish nonsense.
There is a coherent theory of the movement of history in A Vision that gives us
a deeper understanding of the poems, including Lapis Lazuli. That being said,I really enjoyed reading this. Thank you, R.W.